Pretty much a scene-by-scene remake of the original classic (perhaps one of the most well-known horror movies that has yet existed), this movie’s not terrible. The problem is, and this is a big problem, that it’s been done before, and it’s been done so much better that this movie just comes out entirely pointless.

I liked most of the principal cast, which is something I can’t say for other films. Anne Heche (from a favorite of mine, Volcano) played a cute Marion Crane. Chad Everett played the best exuberantly wealthy Texan this side of Rex Linn (Better Call Saul). William H. Macy didn’t blow me away, but what can I say, I like the actor (from Fargo to Pleasantville, this guy’s fun), and he was fun to see.

Neither Julianne Moore (Hannibal) nor Viggo Mortensen really worked in my opinion, but they didn’t bring the film down, which is more than I can say for Vince Vaughn. I liked Vaughn in The Lost World: Jurassic Park, but whoever thought he could replace Perkins as Norman Bates went more than a little mad. It’s no knock at Vaughn, who technically did fine. It’s that Perkins felt so much better in the role.

The main problem here isn’t the fact that it’s a remake, nor is it Vaughn’s portrayal of Bates. It’s that this doesn’t feel inspired whatsoever. There are some movies that it’s pointless to remake, and I’ll go ahead and say that Psycho’s one of them. In 1960, the story was surprising and shocking (both the twist thirty minutes in and the finale), but here, we know exactly what’s coming, but despite some scenes being filmed in the exact same way (such as the stairway sequence), there’s no magic here.

Psycho lacks magic, and that’s the problem. It’s such a well-written story, but this version wasn’t able to capture almost any of it, and ultimately just wasted our time when it could be better spent with the 1960 classic. 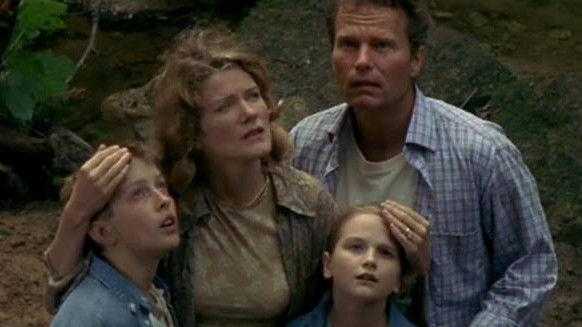 Known best as just Lost Souls (if it’s known at all), this television movie didn’t reinvent the wheel, but in it’s low-budget tackling of a somewhat common story, I found the movie quite serviceable.

Now, I saw this once before many years back, and about the only thing I remembered was the conclusion, so I didn’t get to relive the surprise, but even so, I like how the film focuses on the mystery of unsolved murders and throws multiple suspects out at us, many of them feeling like real possibilities. The idea of supernatural forces from beyond the grave helping people solve an old murder isn’t new, but it was done well, and with feeling.

Communicating through an autistic girl was a nice touch, because both parents here (played by John Savage and Barbara Sukowa) got to see their daughter do more than she’s been able to do (such as sing), and though it’s just a cheap television flick, I still liked that this had heart.

On that note, the horror here isn’t nearly what many fans might be looking for. It might even feel more like a supernatural drama at times, but when you throw in mystery and the decently suspenseful conclusion, I don’t see why all that many people would have an issue seeing this as a horror film, light as it might be.

John Savage is a bigger name, though I’ve only seen him in a handful of low-budget horror movies (such as The Attic). He does pretty well here, and I love the lengths he goes through to both figure out the answer to the old crime and protect his family. His wife, played by Barbara Sukowa, didn’t nearly interest me as much, but both children (Nick Deigman and Laura Harling) are solid, with Harling’s performance perhaps being the best. Richard Lintern was pretty good too.

Nightworld: Lost Souls isn’t anything that special, but I find myself enjoying it more than expected. I definitely liked it the first time I saw this, and it’s pretty much had the same impact on me this time around. It’s not stellar as far as made-for-television horror goes, but hell, I liked it. Sue me, brahs.

This is one of the many films covered on Fight Evil’s podcast. Listen below as Chucky (@ChuckyFE) and I discuss this movie.

In many ways, while still a fun film, this late 90’s slasher feels rather neutered at times. I still like it, and it’s probably one of my favorite late 90’s post-Scream slashers, but still, Urban Legend just felt lacking at times.

First off, though, I have to say that the opening scene has long been a favorite of mine. The gas station attendant trying to shout, “There’s someone in the backseat” just always gave me chills. It was a solid way to open this film. Sadly, much of it can’t maintain that level of pure tension.

The story overall is pretty fun. I just wish that it had been more gory over stylistic, because it really felt like it was pulling it’s punches. Plenty of opportunities for gore, but very little delivery.

The cast was pretty damn good, though. Alicia Witt was decent enough, but Jared Leto (most well-known, to me, anyways, as the lead singer of 30 Seconds to Mars) has always been rather enjoyable in this. Rebecca Gayheart is rather animated (which comes with it’s pros and cons), and Loretta Devine’s character is really fun. Lastly, two great side-characters include Robert Englund (playing a college professor) and John Neville, the college dean (Neville’s most known to me from 1965’s A Study in Terror and The X-Files series), who add good flavor to the film.

Like I said, though, the lack of gore is pretty noticeable here, and it’s rather disappointing that 80’s slashers have more to offer than slashers from the late 90’s. Still, this is one of the post-Scream slashers worth watching, even if it isn’t amazing.

I will admit, this was a deeply disappointing rewatch.

Much of the gore and death sequences in this movie are solid. Electrocution scene, well-done. Nails to the head, pretty good (though I could’ve done without the Pinhead reference). Waterbed death – good idea, not that great an execution. Overall, though, the movie is best when it focuses on these scenes.

Because nothing else is really worthy of much praise.

Jennifer Tilly’s voice annoys me, I won’t lie. But what annoys me so much more is all of the in-jokes this movie had, from the aforementioned Pinhead reference, to a joke about the amount of sequels this series has, and even throwing in artifacts from other famous slashers (A Nightmare on Elm Street, Friday the 13th, etc.). It felt off. Not stupid exactly, but just too close to parody.

An even bigger problem is the story, though, which I just didn’t care for all that much. Because of it’s lighter tone, it’s missing almost all of the suspense that the first three movies possessed, and because of the nature of the plot, it felt extraordinarily ridiculous at times, pretty much all stemming from Tiffany’s character.

Acting was a mixed bag, with some good (Katherine Heigl and Lawrence Dane), some eh (Nick Stabile and Gordon Michael Woolvett), and some atrocious (Michael Louis Johnson is the biggest problem here). John Ritter’s character was a piece of trash, but it was nice to see a friendly face. Brad Dourif did just as good in this performance as he has before, but the script really didn’t help him out. And as much as I don’t want to bash on Tilly, I didn’t care for her character whatsoever, even before her soul went into the doll.

This is a steep decline from the first three movies. The third certainly wasn’t perfect, but it’s tone was still pretty menacing at times. This flick just felt glossy, a bit ridiculous, somewhat vapid, and aside from the gore, not really worth that much. And the ending was just terrible, I thought. Perhaps the most disappointing rewatch in a while, Bride of Chucky didn’t really do it at all for me this time around.

Bride of Chucky is one of the film’s Fight Evil has covered on our podcast, episode #31. Give Chucky (@ChuckyFE) and I a listen as we discuss this sequel.