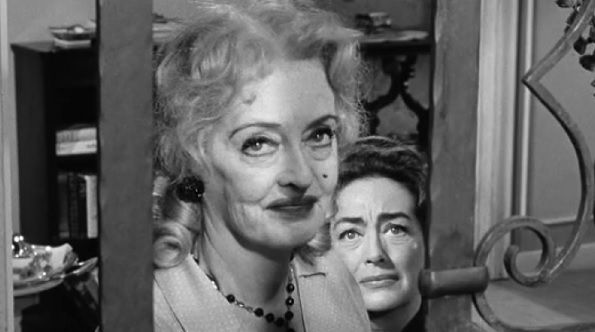 It’s been some many years since I first saw this movie, but I’m happy to report that, with a rewatch, this classic movie has lost exactly none of the magic. With a strong cast, an engaging story, and a rather dreary and helpless atmosphere, What Ever Happened to Baby Jane? is an utterly amazing movie.

A lot of the reason this movie works are the performances involved. Both Joan Crawford and Bette Davis do a fantastic job, Crawford as a wheelchair-bound character in a desperate situation, Davis as a long-faded former star, who’s slipping into deeper mental instability, probably not helped by her heavy drinking. Along with an early role from Victor Buono (perhaps most well-known as King Tut from the 1966 Batman series) rounding out the main cast, you can see the movie has a lot going for it already.

These three did a decent amount for the genre too, which I think’s worth mentioning. Davis later appeared in such films as Hush…Hush, Sweet Charlotte (1964, which I think makes a great double feature with this one, if you have five hours free), Scream, Pretty Peggy (1973), and Burnt Offerings (1976). For Crawford, she appeared in Strait-Jacket (1964), I Saw What You Did (1965), and Berserk (1967). While Buono was more well-known for Batman, he did appear in both The Strangler (1964) and Lo strangolatore di Vienna (1971, also known as The Mad Butcher).

Strong cast aside, the story here is deeply engaging. On the surface, it’s not overly complex, but they throw in a few surprises, and the relationship examined between the sisters brought a lot of emotion to the movie (especially regarding Davis’ performance, who’s character was both often heinous and often heartbreaking).

I suspect the biggest issue that some people would have with this film, or at least the largest hurdle they’d have before watching it, would be the length. At two hours and fourteen minutes, What Ever Happened to Baby Jane? is a long movie, but I personally don’t think any scene needs cutting, and I think the whole film is rewarding, especially the somewhat tonally different finale on a bright, sunny day on the beach.

The black-and-white is crisp in the film, and I think it helps loan the film some additional atmosphere (which the film certainly isn’t lacking on, but even so, every little bit plays it’s part). The suspense here is very solid, and with the story and cast, I can’t think of a good reason not to recommend this one.