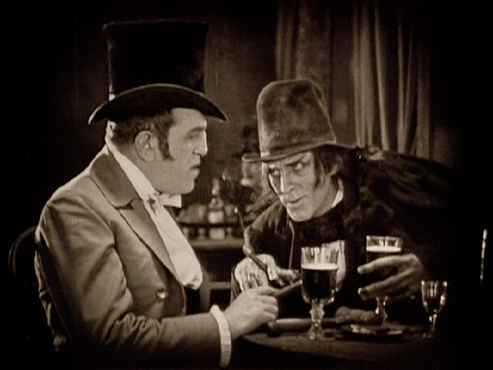 The movie works, by and large, due to a combination of John Barrymore’s solid duel performance as both Jekyll and Hyde (*gasp* yes, they’re the same person) and keeping things within a proper pace for most of the flick. Aesthetically, it’s enjoyable (though lacking much of the art that foreign films at the time, especially those from Germany, tended to add), and the story is fine, despite not being a favorite.

Which is really what holds this movie back from being great, to me. Oh, I don’t question it’s importance (not only is there a solid transformation scene, but there was a pretty creepy scene with what looked like a ghostly giant spider crawling on Jekyll), but I never, no matter the adaptation (be it this flick, which I’ve seen multiple times before, the 1931 version, or any post-2000’s versions I’ve ran across) found myself captivated by it.

The most common print of this movie is around 50 minutes (which is coincidentally the version I have on DVD), but I instead opted out to watch the full one hour and 21 minute version. It certainly gave more story, but again, as I’m not a giant fan of the story, it just felt eh.

Solid pacing and Barrymore’s acting aside, I don’t love this movie. Plenty of other silent horror flicks stand out above this one for me (and some utterly obscure as opposed to this well-known film), and while it’s worth at least one view, I’m not sure it’s worth much more, in my estimation. This is not a bad movie, but it wasn’t my thing, and I found it a bit below average.

A true classic of the silent era, Der Golem, wie er in der Welt kam (a prequel to the lost 1914 Der Golem) is a great watch, even if you’re new to silent flicks. Oh, and the title, in English, is The Golem: How He Came Into the World, should you be curious.

The one caveat is that if you do seek this movie out, make sure you find a version with a score. I’ve seen this twice before, both times with a score, but for this most recent rewatch, I was watching a truly silent version, which I don’t like doing and can negatively impact how I see the film. That said, I will do my best to not let that interfere.

The setting, a slum that the Jewish population are forced to dwell in, was captivating, and showed some inklings of the impressionist style that Das Cabinet des Dr. Caligari is better known for. Homes made of stone, the people wearing little more than robes, really showed the desperate situation the Jews found themselves in, and when they’re told they’re to be expelled by the emperor, it really helps show why one of them would go to the lengths of crafting a Golem.

Which is somewhat ironic, as one of the reasons they’re being expelled is due to their practice of dark magic, which, by creating a Golem, sort of proves the emperor’s point. But that flawed logic aside, I do get where they’re coming from.

Not much of the cast really stood out aside from Albert Steinruck, Paul Wegener, and Lyda Salmonova. Really, the standout is Wegener’s performance as the titular Golem, a very Frankenstein-monster esque creation. He didn’t express all that much a range of emotion, but he did have, at times, a very threatening presence (not all that far removed from Frankstein’s monster from the 1931 classic).

There’s many prints of this flick floating about. This time around, I saw the 1 hour and 42 minute version, which, at times, does occasionally feel as though it’s dragging. Still, there’s shorter versions out there if you want a more digestible taste of this flick. Der Golem, wie er in der Welt kam isn’t my favorite silent horror flick, but it is a classic for a reason, and I’d highly recommend a watch at least once in your life.

This film, generally known as The Cabinet of Dr. Caligari, is a true classic of horror cinema. True, silent films can at times be hard to get into – I perfectly understand that. And this movie’s not perfect.

But here’s what it does have: 1) An interesting plot, which brings to mind films such as Murders in the Rue Morgue, 2) Impressionist set pieces, which look somewhat tacky, but also pretty cool from today’s perspective. 3) You have some good actors, especially Werner Krauss (who plays a fantastic Caligari) and Hans Heinrich von Twardowski (who looked surprisingly like Matt Smith’s incarnation of The Doctor). 4) Lastly, you, believe it or not, have some plot twists, which come as a pleasant surprise, especially from a movie this old.

Germany used to be one of the most prolific and well-regarded countries insofar as producing horror films at the time (this film, Nosferatu from 1922 and Der Golem, wie er in die Welt kam from 1920, are the three pillars of horror in the early 1920’s, as far as I’m concerned). Many of the existing prints out there are pretty bad – blurry, scratched up, what-have-you, but I found a really clean print, in it’s natural German with English subtitles. Only problem is it had no score. Oh well, you can’t have everything. A very good movie, and definitely one of the better silent horror films out there.