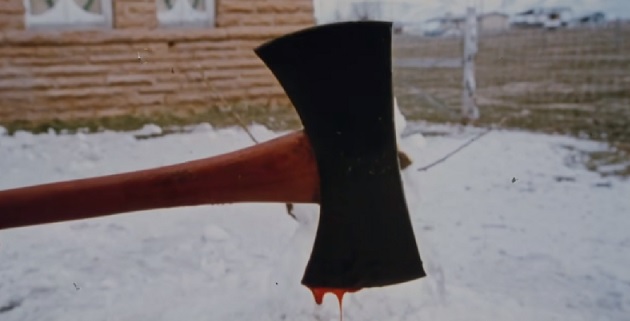 So I first saw this cult classic under in a less-than-suitable way (I sandwiched it in during a day when I watched eight other movies), so it didn’t make much of an impact the first time I actually saw this, so watching it again was something that I was quite excited for, and overall, while I do find a few issues here and there, I generally found the movie pretty enjoyable.

What really stands out, as far as the opening is concerned, is the amount of time spent on Billy’s character as a kid, playing out almost like a character study. It does make some of the beginning feel a tad sluggish, but it’s not that bad, and things pick up nicely when Billy, now 18, gets a job at a toy store, just in time for the holidays.

Which leads to my all-time favorite montage ever in a movie. I mean, if Jesus Christ and Muhammad worked together with Buddha and The Beatles, they couldn’t have come up with a montage as beautiful as this. The focus is Billy’s hard work, both on and off the clock (and his boss’ smile and nod as Billy straightens that book cracked me up to no end), and set to a song called ‘The Warm Side of the Door’ by Morgan Ames. It’s truly magical.

Robert Brian Wilson did pretty decently as the lead, despite never really doing much else before or after. He had a good sense of foreboding that I appreciated, and when he went off the deep end, he went off the deep end. Though she didn’t add as much as you might hope, Toni Nero was good, though her character does bother me a bit toward her final scenes. Ditto Randy Stumpf, only I never cared for his character.

Aside from Wilson, the second-most important performance might well be Lilyan Chauvin (as Mother Superior), who was a solid showcase of the dangers of religious extremism. Superior was literally a horrible woman, and she consistently abused those children, so it’s a shame that she may have survived the film. Admittedly, Linnea Quigley (Return of the Living Dead and Night of the Demons being among her most important work) supplied the film with quality nudity, so her character may well be more important than Chauvin’s.

For the most part, though, Wilson is the focus. Sure, we get a little Gilmer McCormick trying to find and help Billy, and related, some H.E.D. Redford trying to track Billy down, but we pretty much follow Billy as he kills random people on a rampage, which is good and all, but it does occasionally feel as though it’s lacking a personal touch.

I think it’s here that the movie fails a bit, as much of Billy’s killing spree lacks that personal touch that you might expect. I mean, don’t get me wrong, the kills themselves are still decent, but it almost feels hollow at times, which surprised me, if only because that’s not a common feeling I get from the average slasher film (though as said, to be sure, this is far from the average slasher in approach).

Still, that ending. It was both sort of ridiculous and ridiculously funny, so I can’t really complain. Also, on the finale, the fact that it took place during the daytime as opposed to night was an interesting choice, showing again that this movie isn’t the most typical slasher.

I can’t say with honesty that I loved Silent Night, Deadly Night, but I did have a moderately decent time once we got past the somewhat involved opening. It’s not necessarily a movie that I think I’d go back to that often, but there’s certainly a place for it, and for me, that place is probably around average.

This is one of the films covered by Fight Evil’s podcast. If you’re interested in hearing Chucky (@ChuckyFE) and I discuss this cult classic, look no further.