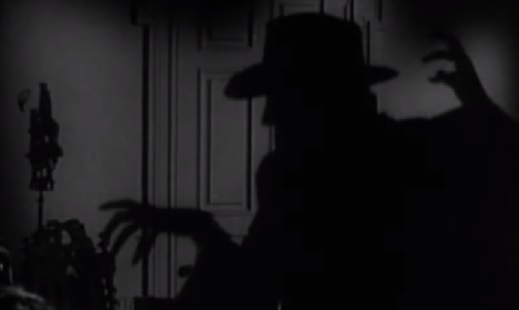 This is a film that I’ve wanted to see for some time now, and despite it being nothing special or really unique in any way, I am quite happy that I finally got to this one, as it’s a fun ride throughout.

What with a hidden treasure, half of a treasure map, multiple parties looking for the gold, and a mysterious Phantom, Horror Island has pretty much all of the elements that make those old dark house mysteries of the bygone era so damn fun, and it’s made moderately more unique by setting itself on an island (and the opening on the atmospheric docks was also welcomed).

It does carry a more noticeable light-hearted element (think Sh! The Octopus), much of it coming from Fuzzy Knight’s character Stuff, but that doesn’t hamper the quality feel that the film possesses, especially once the group gets to the titular island and deal more and more with the mysterious phantom, not to mention some other dangerous characters.

Dick Foran made for a solid, if potentially unremarkable, lead. Having also starred in both The Mummy’s Hand and The Mummy’s Tomb, Foran had that typical lead look that radiates ‘good guy.’ Fuzzy Knight was a lot more meh if only because he was the central source of comedy, and his side-kick character just struck me as more silly than anything else. Peggy Moran (who was also in The Mummy’s Hand) was solid as the romantic interest, her wittiness often amusing.

Leo Carrillo (who played a heavily-accented sea captain), much like Knight, was another source of humor, though I could sort of dig his style. The others that make a difference, such as John Eldredge and Lewis Howard, were just fine, if not, as Foran was, unremarkable.

Luckily, despite having a few sources of humor here, Horror Island never gets to the point where it’s too silly, and in it’s favor, the fact it takes place on an old castle on a small island, what with multiple mysterious parties running around, is nice to be witness to.

Overall, Horror Island is a movie that I’d wanted to see for quite some time, and it lived up to my expectations. It’s not an amazing movie, but it’s quick and easily digestible, not to mention fun, so if that’s what you look forward to from classic horror, give this a shot.