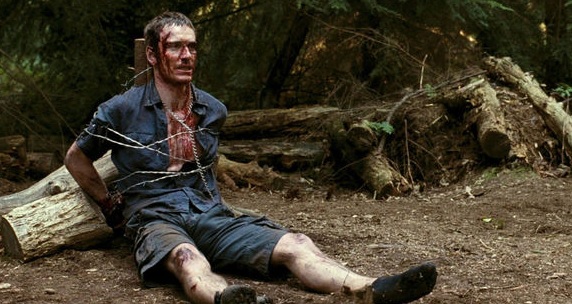 Directed by James Watkins [Other horror films: The Woman in Black (2012)]

The thing about Eden Lake is that it’s a well-made movie with an interesting premise, but it’s utterly demoralizing. It’s not a happy movie, and it’s not something you walk away from without being partially disturbed. That makes for a good movie, but not necessarily a good time.

Like I said, though, it’s certainly well-made. The rising tension and growing escalation between the main characters and a bunch of thug kids is certainly on point. What makes it slightly more interesting is that it’s a scenario that’s somewhat thought provoking in spite of the brutality. Much of this is due to Kelly Reilly’s character being a teacher, and the situation she and Michael Fassbender find themselves in, and she has to defend herself, going on the offensive, against the kids.

And speaking of which, I want to speak a bit on Fassbender’s character. He didn’t seem to have a problem with the kids bullying another kid early in the film. Why? It’s just ‘boys being boys.’ When it personally impacts him and his enjoyment of the day, though, he takes issue, because of course he does.

I don’t mind him asking the kids to turn the music down. I don’t mind him looking out for the kids in town once they cause one of his tires to deflate. But entering another person’s house without permission in order to confront them? Dawg, let it go. But he didn’t, and after his car was stolen, well, we see what happens. Really, past that point, both he and his girlfriend were screwed.

Eden Lake doesn’t take long to get brutal. There’s a bit of build-up, sure, but once the damn breaks, it breaks hard. Some painful scenes throughout assault the two protagonists, from very painful cuts from a box-cutter to someone’s foot being impaled by a rather sharp stick. When said character is pushing that stick out, I cringed. Likewise, when one badly injured character is struggling to keep consciousness, knowing that they are likely to die no matter how quickly help can be brought, it’s pretty dismal.

As is the movie as a whole, to be fair. Like I said, it’s a well-made film, but this is not an enjoyable romp. It’s dark and depressing, and very often more distressing than not. Seemingly good characters turn out to be a bit more ambiguous, and those who move toward a more positive side are killed in generally terrible ways.

To put it as simply as possible, if you had a Baby Blues and Eden Lake double feature, invest in some therapy afterward in order to get through the depression, as both of these are gloomy as all hell.

Certainly, though, Eden Lake is worth seeing. It’s a simple premise, but it’s done fantastically, and as much as a downer portions can be (such as that ending, which just leaves you a mixture of angry and discontent), it’s a great film, and probably one of the better British films in recent times.

This is one of the films covered by Fight Evil’s podcast. Listen below as Chucky (@ChuckyFE) and I discuss Eden Lake. It’s dope, yo.