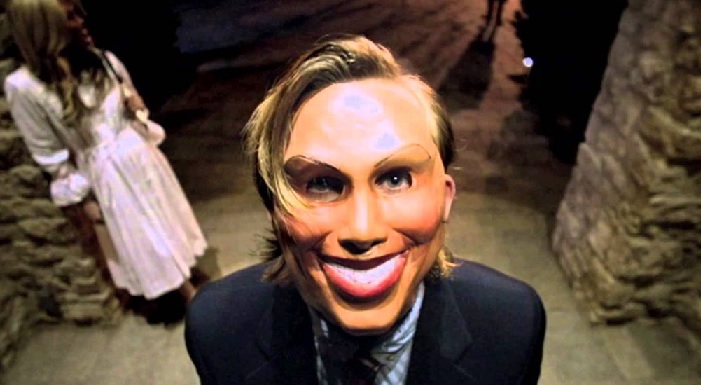 I wasn’t that big a fan of this the first time I saw it, and in many ways, it’s not that far removed from a generic home invasion flick, but I still found myself enjoying it more than some years back when I first saw it. I’d never call The Purge great, but I think it’s decent.

The cast here is surprisingly solid. Ethan Hawke (Sinister) was thrown into a pretty interesting role of a father trying to protect his family. Lena Headey (Game of Thrones) actually got some sympathy from me, which was nice. Adelaide Kane was quite attractive, which was a nice plus. Though maybe a little over-the-top, Rhys Wakefield was pretty fun (and psychopathic) in his role too.

What is most interesting about The Purge is the Purge itself, an annual event in the U.S.A. in which all crime is legalized in order to ‘purge’ the hatred and violence in the citizens, giving them an outlet for their desires. Otherwise, crime is low, and society is generally happy, including Hawke’s family, who are quite wealthy due to his business in selling security systems. Because they’re wealthy and have little chance of being impacted, Hawke’s character fully supports the Purge, despite not participating himself.

It’s a very barbaric idea wrapped up in psychology and good policy. The rich going around and killing the poor (physically, as opposed to how they do it in our actual society) is certainly somewhat a political statement, and this movie was interesting for that aspect alone. The dialogue of Wakefield made it quite clear that he thought the homeless were only there to be purged, which is an unique point-of-view, not to mention arrogantly self-centered (but we’re talking about the wealthy here, so I’m repeating myself).

Obviously, I think The Strangers had a lot of influence on this one, from the whole home invasion thing to the creepy masks the multitude of killers wear. Now, I actually like this a bit more than The Strangers, because the whole Purge element, while pretty ludicrous, is still something that’s on the unique side of things (and also, given it’s government-sanctioned, adds an extra element to it). I wasn’t a big fan of The Strangers anyway, so while this isn’t necessarily a whole lot better in terms of home invasion (though it is, to the extent that we have a family here while in The Strangers was a soon-to-be-broken up couple), I do find The Purge better.

There’s some violence here, but none of it is really over the top, and while we do see some knives and machetes, much of the violence is via firearms, giving a much more action feel to this film than a horror one. Make no mistake, the movie’s still horror, but don’t be surprised if you feel like you tuned into Die Hard at times.

The Purge isn’t a great movie, but I do think it’s decent, and reasonably entertaining with a strong cast and interesting moral issues that aren’t generally present in other home invasion flicks, which alone gives it a slight edge.