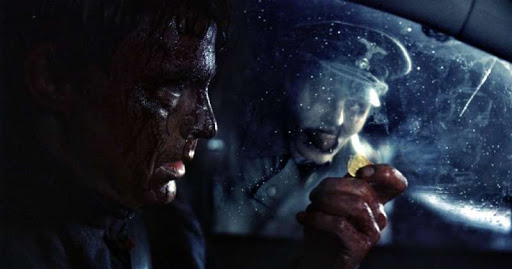 From Norway, we are introduced to Død snø, commonly known as Dead Snow, and it’s a decently enjoyable time, though not amazingly so.

Zombie movies have never been a favorite subgenre of mine, but this does pretty well. The humor isn’t generally too over-the-top (though certainly, toward the end, things get just a bit more ridiculous), and there are some pretty fun scenes here, from the memorable opening to plenty of great fight sequences.

The gore is definitely done well here too, and it’s hard to say any one thing stands out when there’s so much on-screen, but I did like one of the character’s getting their face ripped apart, and another character got his arms and legs torn off, which doesn’t sound particularly pleasant. Throughout the film, there’s solid gore, and I think most people going into Dead Snow for the violence will be happy.

It’s hard to say that any one actor stands out here. Vegar Hoel and Stig Frode Henriksen work well together in the end, and seeing the two of them kick zombie ass was, as the kids nowadays say, hella beast. I do like Hoel’s personality here, so the ending hit somewhat hard. Lasse Valdal had a somewhat fun hippie vibe, and I wish he appeared more, though he did get some solid licks in. Charlotte Frogner was especially good, and her conclusion is probably the most tragic of the lot.

Aside from the gore effects, the Nazi zombies look pretty spectacular too, and their origin (which mixes in some history for us) is fun. This was a small thing, but I did like that hammer and sickle reference – brought a smile to my face.

Off the top of my head, I can’t say that I’ve seen too many Norwegian movies. Ignoring this one, I think I’ve only seen two others, being Trollhunter (Trolljegeren) and Lake of the Dead (De dødes tjern, from 1958), and this is probably the best of the few I’ve seen. I have heard, and it’s backed up by the IMDb ratings, that the sequel to this is better, which is good, because as enjoyable as this can sometimes be, it’s not amazing.

When I first saw Dead Snow, I believe I enjoyed it more, but it’s still a fun film. I wouldn’t really go out of my way to watch this that often, but for a foreign slice of zombie cinema, I think it’s decent and probably worth watching at least once, and it ends up just around average.

This is one of the films covered on Fight Evil’s podcast. Listen below as Chucky (@ChuckyFE) and I discuss this one.