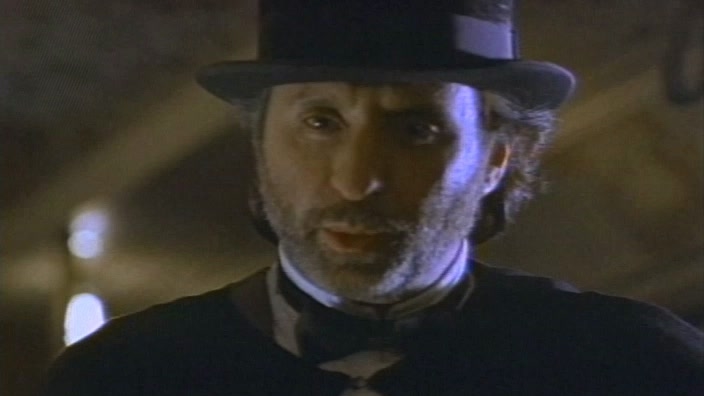 Okay, this is a movie that I don’t think many horror fans would take a big interest in, primarily due to the fact it’s a movie aimed more toward older kids/younger teens, and it pretty much feels like an hour-and-a-half episode of Are You Afraid of the Dark?, mixed with an element or two of a more kid-friendly Tales from the Crypt.

Having seen this vampire movie twice now, though, I can firmly state that I quite love it.

Some of this undoubtedly comes from the cast. It’s true that most names here are new to me. The main kid, played by Chauncey Leopardi, was pretty decent, in a corny, Goosebumps-main character way. And speaking of Goosebumps, his father was played by Ron Lea, who was in the Werewolf Skin two-parter (which I own on VHS, and always thought added something interesting to the werewolf lore). Leopardi’s two friends are, of course, a black dude and a white girl (typical equality from Are You Afraid of the Dark?/Goosebumps), played by Tony T. Johnson and Natanya Ross.

Johnson I was more lukewarm toward, mainly because he was one of the main comedic relief elements, but I really liked Ross’s character, especially since they threw in that her character had dyslexia (which led to a painful argument between her’s and Leopardi’s character). It might not be game-changing, but how many horror movies throw in learning disabilities like dyslexia? I get it, it’s to show kids that not all kids have it the same, but I still find it somewhat commendable. Oh, and Wes Craven appears for a few scenes, which is sort of fun.

It’s the last actor, though, and the co-star with Leopardi, that makes the film all the more enjoyable, that being Ron Silver. Silver doesn’t seem to be that big a name, but I’m personally a fan of the series The West Wing, which is a politically-based show with a lot of great names and fun plots. Silver plays a recurring character in the show, so seeing him here (with pretty much the same, quietly humorous personality) was an utter blast. At the time I first saw this movie, I hadn’t really gotten into The West Wing yet, so this only increased my enjoyment with a fresh watch.

The plot is, I’ll say it again, much like something you’d see on Are You Afraid of the Dark?, being a little bit silly. Here, a coven of vampires live in the New York City subways, living primarily off rats, and once lead vampire Silver meets Leopardi’s character, works on trying to gain his coven the freedom to roam the city proper. It’s nothing special as far as vampires go, but I did think it was mostly well-done.

It’s worth noting that the budding friendship between the kid and the vampire was touching at times, and though I didn’t shed tears or anything, I did think the conclusion was pretty touching also (not to mention satisfactory even without that). Not everything is quite as explained as you’d hope, but overall, I can’t help but have a good time with this.

There’s not a whole lot in the way of blood here, which can only be expected. To be fair, there are a few surprisingly gruesome vampire deaths here (some of which are quite gooey), but that’s about as far as it goes. I mean, come on, this is made for kids.

Also have to throw a shout-out to the kid’s love of horror movies and that hella beast video store with a beautiful collection of horror posters thrown up on the walls, such as Sssssss and The Mutations, a 1974 British flick with Tom Baker and Donald Pleasence.

Shadow Zone: The Undead Express isn’t a movie that’s likely to impress all that many horror fans who see it. It’s a made-for-kids television movie, but I personally grow up on Goosebumps and Are You Afraid of the Dark?, so it was definitely the type of movie I would have loved if I had seen it back then. The nostalgic feelings are deep regardless, and I find this movie an exceptionally enjoyable watch.

This is one of the movies that was covered on Fight Evil’s podcast, episode #29, so if interested, you can hear Chucky (@ChuckyFE) and I discuss this one.