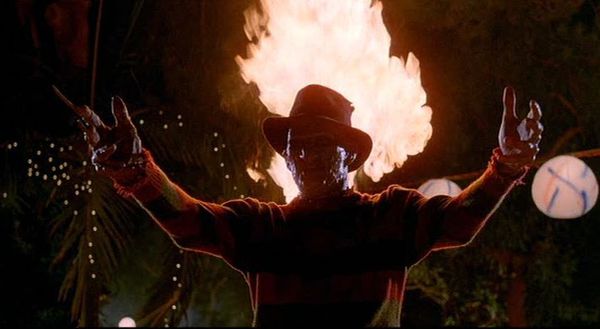 I’ve seen this movie so many times, it’s really hard to take a step back and look at the whole picture. Portions of this movie are really cool, and the special effects are amazing (Freddy popping out of Jesse’s body, Freddy’s melting face at the end, etc.), but the movie, as a final product, is rather nonsensical.

There were subplots that weren’t really expanded on (such as why the house was hot, why things kept catching fire or exploding), elements of Freddy’s abilities that weren’t touched upon the previous movie, and the fact that almost all of Freddy’s appearances toward the end seem to be in this reality, not a dream world, was left completely alone.

The movie is a mess. But as much a mess as it is, I still think it’s fun and rather unique, which makes sense as it’s probably the black sheep of the original series (the first film to Freddy’s Dead).

Despite having a bunch of no-name actors, I think things work out okay. Mark Patton, Kim Myers, Robert Rusler, Clu Gulager, and Marshall Bell are all pretty memorably characters (especially Bell, who dominated as a gay gym coach). The acting isn’t great, and sure, sometimes Myers’ got a bit much, but still, I think it worked. Robert Englund, of course, did well as Freddy.

Somewhat related, while it doesn’t really make sense to me, I did like the whole poolside massacre sequence. Solid stuff, including one of my favorite lines of Freddy’s, being, “You are all my children now.” Again, it doesn’t make sense, but it’s a fun scene.

The original movie is a beloved classic, so any sequel would come as a disappointment, and given that this one is so far removed from the first, it hits this one even harder. And without a doubt, the third movie blows this one out of the water. But still, I’ve seen this movie multiple times, perhaps seven, eight times now, and Freddy’s Revenge is fun. Wish they tried tightening the story, or doing more with Grady, or even touching more on what is obviously Jesse’s battle with his sexuality, but still, it’s a fun mess. And it’s still better than the god-awful fifth movie.

This sequel was covered on episode #32 of Fight Evil’s podcast, so if you wanna hear Chucky (@ChuckyFE) and myself discuss this on, give it a shot.