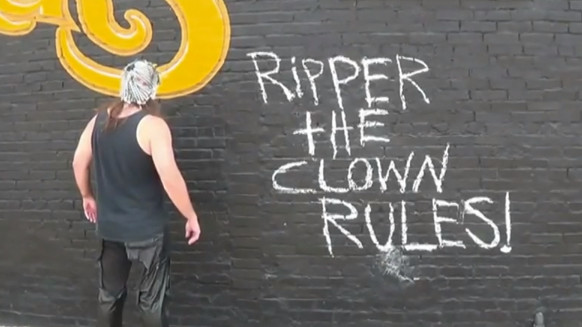 Depending on your expectations, The Stripper Ripper might come across a hoot, or one of the worst things you’ve ever seen. Truth be told, I’m leaning toward the latter.

This comedy-horror spoof-type movie, at this point in time, doesn’t appear to have an IMDb page [and as I saw this in April 2018, it’s been a year, and still no page up], but information can be found out about it from various online articles.

Filmed entirely in Danville, Illinois, this movie, for the most part, acts as a documentary about a clown terrorizing Ripper County, delving into the victims of the so-called Stripper Ripper, copycat crimes, local reaction to the events, along with interviews from FBI profilers and a Sam Loomis-inspired character named, you guessed it, Dr. Pleasance (played by Shawn Hosseini).

It’s a very silly, slapstick movie, which is exactly what author and first-time director Jake Aurelian was going for. The thing is, I just don’t think it works well at all. Perhaps as a short, this could have been okay, and maybe mildly amusing, but at an hour and 22 minutes, it just drags on and on.

Sure, we have a plot of sorts: a clown is assaulting people by throwing pies in their faces, and Dr. Pleasance tries to get the local authorities to take the guy seriously, all the while the Stripper Ripper continues his reign of terror. But some of the sequences just run on far past the point of amusing. Indulge me, please, as I list a few examples.

Berating an impersonator, the Stripper Ripper complains for something like five minutes (occasionally impersonating Macho Man Randy Savage, for some reason) before finally punching out a guy who is mimicking the Ripper’s style. There’s an “interview” with a comedian who got arrested for threatening an audience member that he’ll pie her face (in the local climate, this came across as tasteless, apparently). It’s fine in theory, but again, it’s at least a five minute scene.

Out of those four scenes, 25 minutes total have passed. And nary a chuckle was to be found.

Certainly, there were some occasionally funny moments, such as the “Run, Lola, Run,” line, and Shawn Hosseini’s acting is just so unbelievably amusing. But for a movie that is first and foremost a parody, the laughs are too few and far between.

One more positive thing I’ll say for it – the actress Chloe Miller (playing a character named, get this, Laurie Lee Curtis) was moderately decent in her role. With the few scenes she had, she definitely seemed a bit of a highlight to me.

Many portions of this film mimic well-known scenes from Halloween, which is all well and fine, and perhaps if the movie focused more on parodying that classic, I might have enjoyed it more. But slapstick has never been my thing, and this movie just went overboard on everything (don’t even get me started on the narrator – the narrator was almost worse here than in Curse of the Faceless Man). These individuals may have had a great time making this, but I just had a horrible time watching it.